Hadrosaurs, the so-called "Duck-billed" dinosaurs have been compared to cows on a regular basis. I think the main idea with this comparison is in the idea that there were likely vast herds of these dinosaurs stretching as far as the eye could see in different regions of the world during the Cretaceous. One of those dinosaurs was Edmontosaurus. Possibly not the most exciting in appearance, we know that Edmontosaurus annectens was a well distributed genus across North America, consists of two recognized species (E. regalis, Type species, Lambe 1917 and E. annectens, Marsh 1892) has a number of synonyms associated with it including Anatotitan, Anatosaurus, and Trachodon. Appearing as a "typical" hadrosaur (probably only outshined by the familiar appearance of Iguanodon in this respect), Edmontosaurus is a large herbivore and some might remark that it is quite unremarkable. The type specimen is estimated to have been between 9 and 12 m (30 and 39 ft) long and may have weighed as much as 4 tons. A handful of both species have even been discovered as fossilized mummies or have been associated with skin impressions and even a rhamphotheca, the keratinous portion of the beak-like end of the mouth and snout.

Cryolophosaurus, as a holotype fossil, consists of a partial skeleton that was discovered with a complete skull (cranium and face plus lower jaw and teeth). As far as paleontology goes that is somewhat rare, but it does happen from time to time and the dinosaurs (or other fossil animals) we find as mostly whole are often bewildering and exciting. Obviously, I think, Cryolophosaurus was a very exciting find for a number of reasons: the state of preservation, as just noted; that it was discovered in Antarctica; and the always talked about head crest adorning its cranium. The head of Cryolophosaurus is amazing all by itself though, even without the crest. Approximately 65 cm (26 in) long, Cryolophosaurus' head was a little less than 1/3 the length of the largest Tyrannosaurus skull (1.52 m; 5 ft). The skull was also considerably narrow and tall, from top to bottom, as well. Running from the nasal area to the side-to-side crest is a ridge that runs courses along the midline until it widens and meets with the perpendicular crest that is so iconic of the dinosaur. The purpose of the crest has been discussed many different times in many different ways. It has been considered a fighting implement by some and a social ornamentation by others. Many have hypothesized that the crest was used for mating displays. Much consideration has been given to other characteristics of Cryolophosaurus as well. The crest as well as a large group of other characteristics have led to many different phylogenetic hypotheses for Cryolophosaurus. Rather than revisiting all of these, we can note that currently Cryolophosaurus appears to be nestled in a spot in the family tree that is a little more advanced than Dilophosaurs and Ceratosaurs, but more primitive than Allosaurs and Coelurosaurs (the group that includes Tyrannosaurus as well as ornithomimids and maniraptorans).


Enjoy this video today from the Natural History Museum of Los Angeles County. This is a short tour of the Cryolophosaurus reconstruction that was at the museum late last year. Dr. Nate Smith talks about our friendly crested theropod. If you need more fun videos, check this out too (you know you want to).
Posted by Ian N. Cost at 13:03 No comments: 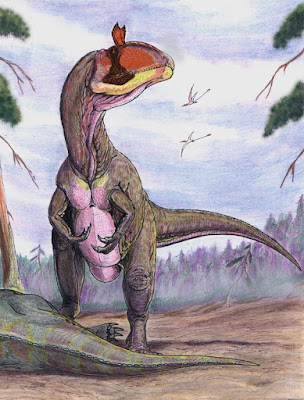 Over the years this site has covered a lot of different dinosaurs and fossil animals from a lot of different areas, regions, and continents (and of course some animals that were living between continents at one point or another). I have been digging back in the oldest of entries lately to try to re-cover some dinosaurs and fossil animals that we may not have discussed. Interspersed with new animals, I think this is useful for everyone interested in reading, and it lets us all revisit some old friends. One of the past favorites is a large theropod dinosaur from Antarctica with a rather interesting bony headpiece: Cryolophosaurus ellioti (Hammer and Hickerson 1994).

Cryolophosaurus roughly translates to "cold/frozen crest lizard" and for good reason. Being found in Antarctica explains the first part of the name, but the second part of this genus is attributed to the large crest on the top and back of this animal's head. An estimated size of 6.5 m (21.3 ft) and 465 kg (1,025 lb) make Cryolophosaurus the largest theropod of the Early Jurassic. It has been noted that the known remains are not even those of an adult, which means that these size estimates probably are not for a full grown animal. Molina-Pérez and Larramendi (2016) presented estimates of a fully grown adult at approximately 7.7 m (25.3 ft) and 780 kg (1,720 lbs). Regardless of its size, what people notice first is the crest. The dinosaur has been given the nickname "Elvisaurus" (I very much dislike Elvis, but to each their own) because the crest is oriented from one side to the other, making it appear, apparently, like Elvis' pompadour hairstyle. You be the judge on this one.

Life at the End

It is not too often that we are able to say that we have a fossil that comes from an area of the fossil record that basically butts up against the K-Pg boundary (Cretaceous - Paleogene Boundary; the site in time of the extinction event that claimed the non-avian dinosaurs). However, Alamosaurus, is one of those animals that appears to have been one of the very last of the non-avian dinosaurs that roamed the earth. Known largely from the Ojo Alamo Formation (as previously noted) and the Javelina Formation, many of the fossil remains of Alamosaurus are between 69 and 66.5 million years old. There is at least one juvenile skeleton known from the Black Peaks Formation, an area of the fossil record that envelops (contains) the K-Pg boundary. We can infer from this that Alamosaurus was alive (and well, probably) near, if not right up to, the extinction of the non-avian dinosaurs. 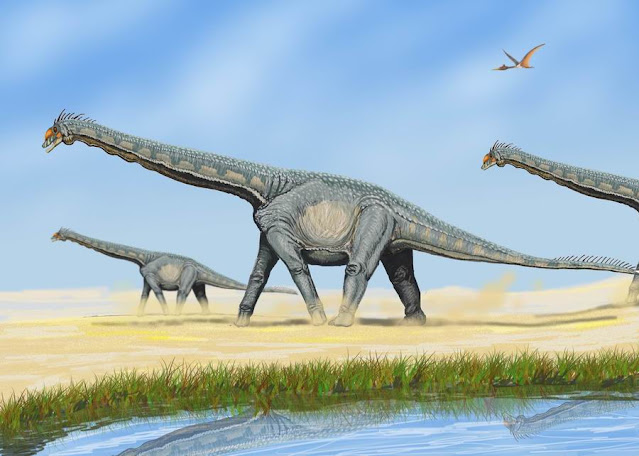 Alamosaurus sanjuanensis is estimated to have grown to approximately 30 m (98 ft) long and to have weighed up to 80 tons. That is a just a little more than 4 fully loaded school busses (we can call it 4 and a half just to be safe). If one were curious about length, that is about 10.6 m (8 ft) longer than two school busses; we can make that 2.2 school busses in length. Living immediately prior to the K-Pg (Cretaceous - Paleogene) boundary, notable because of the extinction event that eradicated the non-avian dinosaurs, Alamosaurus was one of the last of the sauropods and, more generically, the non-avian dinosaurs to have evolved and to have lived. Remains from multiple specimens represent differently aged animals. This means that we have, we think, a good representation of this dinosaur species across a large portion of its lifespan from juvenile to adult (also known as ontogeny). Named in 1922 by Charles Whitney Gilmore, a paleontologist at the United States National Museum, now the National Museum of Natural History (commonly referred to at large as "The Smithsonian"), Alamosaurus was originally discovered in New Mexico during 1921 in the Ojo Alamo Formation and not, as the name immediately may appear to suggest, in Texas. It was named by Gilmore for the formation, not for the more widely famous Alamo in San Antonio, TX. The specific name refers to the New Mexico county (San Juan County) where the holotype remains were originally discovered. Remains have been found, since that time, all across the southwestern United States of America and are housed in different institutions from California to Washington D.C. When considering its estimated size, we can say that Alamosaurus is a titanosaur (a group of large sauropod dinosaurs) that is nearly the same weight as the titanosaurs Argentinasaurus and Puertasaurus; both are large sauropods known mainly from Argentina.
Posted by Ian N. Cost at 12:23 No comments:

It is unclear exactly how most dinosaurs hunted prey. We have hypotheses, some more well supported and considered than others, but unfortunately we do not have any trail cameras or candid videos documenting behaviors of dinosaur hunting. As many of us may have heard, at least once in our lifetime, many dromaeosaurs are thought to have been pack hunters; tracking, ambushing, and taking down prey that was far larger than a single animal to feed a large group of predators. Not all of the species within this group of animals is thought to have exhibited this complex social system. Often, wolves are used in analogy to describe these pack hunting behaviors, and for good reason. Utahraptor, as the largest of the dromaeosaurs, is one of those dinosaurs thought to have hunted this way and is often compared to wolves. Recently Frederickson et al. (2020) analyzed the teeth of Deinonychus and concluded that pack hunting was not likely to have been a characteristic social interaction in these smaller dromaeosaurs, but no such study has been conducted with Utahraptor. For the moment at least the idea of Utahraptor as a pack hunter still exists. This behavior was central to the theme of the novel discussed the other day. Additionally, this behavior is hinted at by a number of studies of Utahraptor including one that looks at a hypothesized quicksand death trap that may have enveloped an entire pack including juvenile animals (Kirkland et al. 2016). It is possible that, in addition to a complex social system wherein pack mentalities developed, that Utahraptor may have been simply too large to chase fast prey and too small to take on large prey alone. The describing paper, Kirkland et al. (2001), concluded that Utahraptor was likely slower than its cousins Velociraptor and Deinonychus.

Rather than post an image directly in here today, I refer you to Julius Csotonyi's interpretation of the quicksand event that may have led to the discovery of a pack of fossilized Utahraptors as described in Kirkland et al. (2016).

Ian N. Cost
I am an educator and a researcher. I am interested in how the feeding apparatus of reptiles, especially birds and dinosaurs, has changed over time. Therefore, I conduct research focused on the anatomy and biomechanics of the head. My research specifically seeks to answer questions concerning the functional morphology and biomechanical environment of the palate, including kinetic movements of the skull. Understanding the impact that palatal movements and the joints that are in the head have on the ecological role of all reptiles, including birds, allows us to better comprehend the evolution of the feeding apparatus in extant and fossil animals and is of great interest to me.