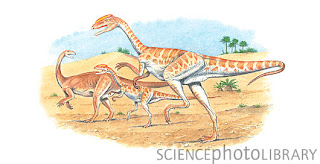 Liliensternus is a very gracile looking dinosaur. It is also a very early dinosaur as it came about in the Late Triassic. Images of the animal sometimes do not come out like we imagine they would, as happens with almost all dinosaurs considering that the artist's impression is quite important in developing the image. Typically this is due to the wide arrangement of interpretations of the skull crests of Liliensternus. Most illustrations show the crest in mundane colors as well, which, given the fact that the most probable use for a crest of that shape, size, and absence from the actual skull (The fact that an entire skull has not been recovered, to my knowledge, does hinder this debate) was courtship and mating or displays of aggression, seems a little strange because, if used for the most likely purposes, the crest should look like it does in the live show of Walking with Dinosaurs (see below). 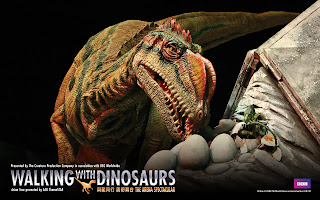 The fact that the only displayed Liliensternus I have ever seen lacks any ridges over the eyes is open to debate about the validity of that assertion, that it lacks a ridge. Originally Liliensternus was placed within the Ceratosaur family along with Ceratosaurus, Dilophosaurus, and Coelophysis. This has since been changed and now the coelophysids (Coelophysis, Liliensternus et al) and the dilophosaurids (Cryolophosaurus, Dilophosaurus et al) have been moved out of the Ceratosaur family and given their own separate families. If artists go by the old family lines, crests would certainly be expected as many of their fellow family members possessed crests (e.g. Dilophosaurus, Cryolophosaurus, Ceratosaurus). In the new family lines Liliensternus is a part of the coelophysids, Late Triassic dinosaurs who did not possess any cranial ornamentation that we have so far discerned. Therefore, in the modern familial organization, a skull crest makes little and almost no sense in Liliensternus, but it does remain.

Another  issue that many illustrations have that I question, personally, with the new family lines is a very Dilophosaurus like configuration of the mouth as well as the eyes. It doesn't make it bad art or interpretation, it's just something that does not really mesh well with the current familial orientation with Coelpohysis. Coelophysis, for example, is typically depicted with a slender face that is even, not pitted like a Dilophosaurus and does not have a crook in its maxillary bone but possesses a straight (or close enough) bone from the front to the back of the mouth. In the old family lines the eyes may have been in a more pitted face with a slight crook in the jaw like taht found in Dilophosaurus maxillary. The example to the right is a perfect example of the older family lines style of illustration and even has a very Dilophosaurus like head crest as well which certainly accentuates the older family lines. 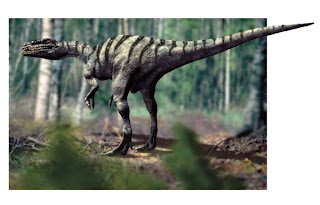 This version of Liliensternus, I have decided, is about the most "modern" in terms of the family lines. It has the un-debated body type we have looked at in every image as well as a very early dinosaur hand configuration. The thing that makes it truly "modern" is the head. There are no crests and the face is much more Coelophysis like in construction. This head is much, much more like the head of the animal we would expect in its current placement in a family which does not sport crooked maxillaries, head crests, or deeply pitted fenestrae. Let me know how you feel about the modern vs traditional image debate!
Posted by Ian N. Cost at 09:11