Paulo Marcio created this rather large, the downloaded image is 3493x2783, image of Europasaurus and Germanodactylus as part of an art contest for the Museum of Germany. It's very colorful and has a good sense of wonderment to it and, with its rather large size, has exquisite fine details. One thing that would make our specialist friends in the field of the pterosauria highly critical, I believe, would be the wing details. The crest is, for sure, larger than most fossil evidence I have seen, however, as noted in Bennett's paper on soft tissue in Germanodactylus crests (which we will get to later this week), the crest was probably larger in adult than in juvenile specimens and therefore we can account that detail to the inclusion of full adult Germanodactylus (Germanodactyli? Germanodactyluses?) in this image. The cause for this criticism, I believe, may rest in the posterior portion of the wing attaching to the knees of the reptiles with a membrane between the legs as well. However, some may not be critical of this as I have seen the argument in both directions; that wings did do this and that wings did not do this and even heard mention that these styles of wing attachment are far too bat-like to be realistic. This not being my area of expertise, I would rather not have an opinion at the moment on the construction of pterosaur wings... maybe I'll develop one later!

Joao Boto's crest I am a little concerned about I have to admit. All of the Germanodactylus crests I have seen in papers and scientific illustrations so far are very flattened and rising off of the nasal then looping back gently to reattach in the post-occipital region; very stereotypical looping on a pterosaur crest really for the most part in what I have seen. Some examples I have seen, of juveniles if we go by Bennett's conclusion that small crests are evidenced in juveniles while large crests can be found in adults, look almost as though they are nothing but raised ridges following the midline of the skull from nares to the orbit; the orbit on these pterosaurs being rather large and a post-orbital fenestra not appearing it seems. Regardless, Boto's crest is enormous and only appears to be seated above a rather forward situated orbit. The look of it to me, as an animal that does not support a great deal of weight directly above its eyes, looks like it would be awkward and difficult to manage during flight. As a rudder during flight even the slightest rotation of the skull would change directions which I suppose with a crest like this may be beneficial but I could also imagine it may be mortally hazardous in a long slow glide above water to spear at near-surface swimming fish. Then again, as stated previously this month, the effect of a head crest as a rudder on a pterosaur may be a great deal less than what I think it is. Either way, the UV photos of Germanodactylus I have seen have far less prominent crests than Boto's illustration, see the outline of soft tissue below: 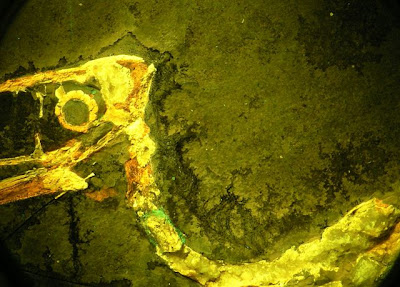