The holotype of Yutyrannus had feathering evident on the pelvic and pes areas of the fossil. A specimen known as ZCDM V5000 was discovered with feathers facing posteriorly on the tail. The feathers come off of the tail at an angle nearing 30 degrees. All of the feathers were short, compared to the overall body size of the animal, but varied in length depending on the area of the body in which they were encountered. Neck feathers on the smallest discovered specimen consisted of filaments measuring nearly 20 cm in length with 16 cm long filaments discovered on the forelimbs (upper arm only). Two hypotheses have formed around these feathers. One hypothesis concerns the idea that the feathers that have been discovered are the only feathers to be found on Yutyrannus and are therefore only display features of the dinosaur. The second hypothesis states that these are merely the only evidenced feathers and that a thin coating of these somewhat long filaments covered the body entirely. This would coincide with the fact that the landscape at the time was a bit colder and Yutyrannus required the insulation layer that only such feathers could provide. 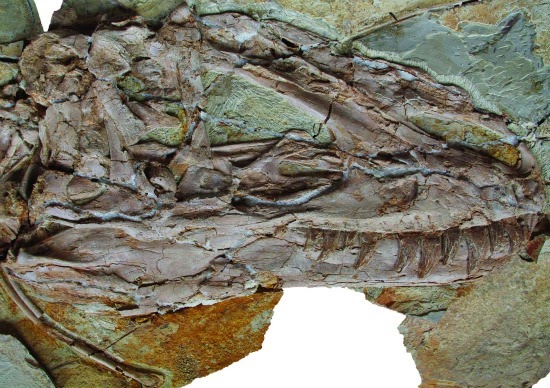